When is Your Kid Ready for Harry Potter? A Guide for Getting Started 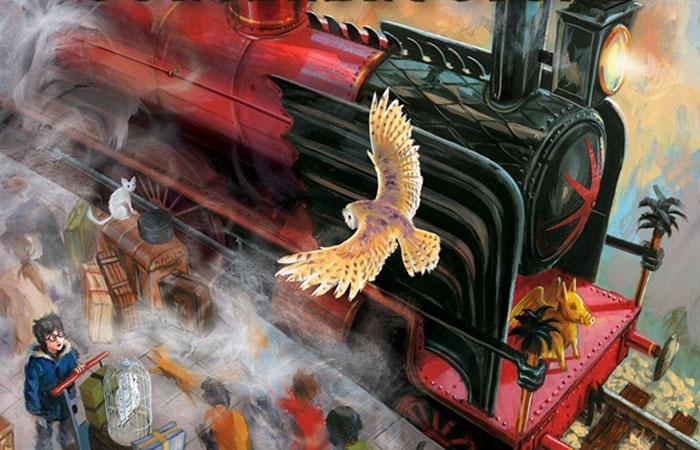 When is Your Kid Ready for Harry Potter? A Guide for Getting Started

“You’re a wizard, Harry.” As a bibliophile and a parent, you’re so eager for the day your kid is ready to read those words and enter the wizarding world of Harry Potter. But along with fanciful components like letter-delivering owls, chocolate frogs, a hidden train platform, and an enchanted Sorting Hat, come darker elements, like an orphaned and neglected child, beloved characters’ deaths, soul-sucking Dementors, and the innate evil of Voldemort.

So at what age is a kid ready to read the Harry Potterseries? Like most milestones, there is no “right age.” It all depends on the kid—and the parents. But there are a few age-related guidelines to take into consideration: From a technical standpoint, Harry Potter is categorized as a middle-grade read, which typically encompasses 9–to–12-year-olds. That said, Harry is 11 years old in the first book in the series and 17 by the final book, and kids generally like to read about protagonists in their age range or a couple of years older. Additionally, not only does Harry get older and the content get darker as the books progress, but the books themselves get longer, which is typically indicated for older readers.

Think it might be time for your kiddo to embark on this journey? Check out some of our tips below—along with some words of wisdom from J.K. Rowling’s magical characters—for getting started.

“Everyone starts at the beginning at Hogwarts, you’ll be just fine.” —Rubeus Hagrid, Harry Potter and the Sorcerer’s Stone

It seems we humans are getting worse at delayed gratification. We watch an entire television series the day it comes out on Netflix, two-day delivery of a package feels like an eternity, and allowing email to refresh only every five minutes feels like four minutes too long. But for those of us who read the Harry Potterbooks as they were released one by one, starting with Harry Potter and the Sorcerer’s Stone in 1997, we had to wait a whole year for book two, another year for book three, and another year for book four. Then we had to wait for three years for Harry Potter and the Order of the Phoenix, two more years for Harry Potter and the Half-Blood Prince, and two more years after that for the final book to be released in 2007—a decade after the first.

So it can understandably feel a little overwhelming thinking of your wee one devouring the entire series in a month’s time. But just like Harry starts his Hogwarts journey at the beginning, so does your kiddo. Take it a step at a time, and let your kids and your parental instincts be your guide. Maybe gift your kiddo one book per year—and if you want to totally geek out, you could give it annually on Harry Potter’s birthday, July 31.

“Words are, in my not-so-humble opinion, our most inexhaustible source of magic. Capable of both inflicting injury, and remedying it.” —Albus Dumbledore, Harry Potter and the Deathly Hallows

As Hogwarts’ headmaster so eloquently states, words are powerful. And lots of children are surprisingly great at self-limiting their reading choices. If they pick up a book and it’s too advanced for them, doesn’t resonate, or they can’t get into it, they’ll likely just put it down. Maybe they’ll pick it back up later. Maybe not. But if you’re worried about their ability to handle some of the more intense/darker content from the books, do what we’re always asking kids to do: Use your words. Talk to your kids about the books. Tell them about when you first read the books—how old were you? What did you think of them? Why are they so important to you? Maybe even read the books aloud together—the new illustrated editions are amazing for that—or agree to watch the movies together as they finish each book on their own.

“It does not do to dwell on dreams, Harry, and forget to live.” —Albus Dumbledore, Harry Potter and the Sorcerer’s Stone

Yes, every child—and adult for that matter—should have the chance to experience Harry Potter at some point. But if they’re just getting started on chapter books or have nightmares about Room on the Broom, kids probably aren’t ready for Harry Potter just yet. But that doesn’t mean you can’t get them started on another magical series like The Magic Half  by Annie Barrows, The Worst Witch by Jill Murphy, or Tuesdays at the Castle by Jessica Day George.

“Don’t let the muggles get you down.” —Ron Weasley, Harry Potter and the Prisoner of Azkaban

Other parents giving you the side-eye about letting your kid read the series too young (in their opinion) or for not letting your kid get started on the books? Heed the wise words of Harry’s ginger BFF and don’t listen to the haters. You know what’s right for your kid. It’s not like you’re forcing them to live in a cupboard under the stairs, right?

What do you think is the right age to start Harry Potter?