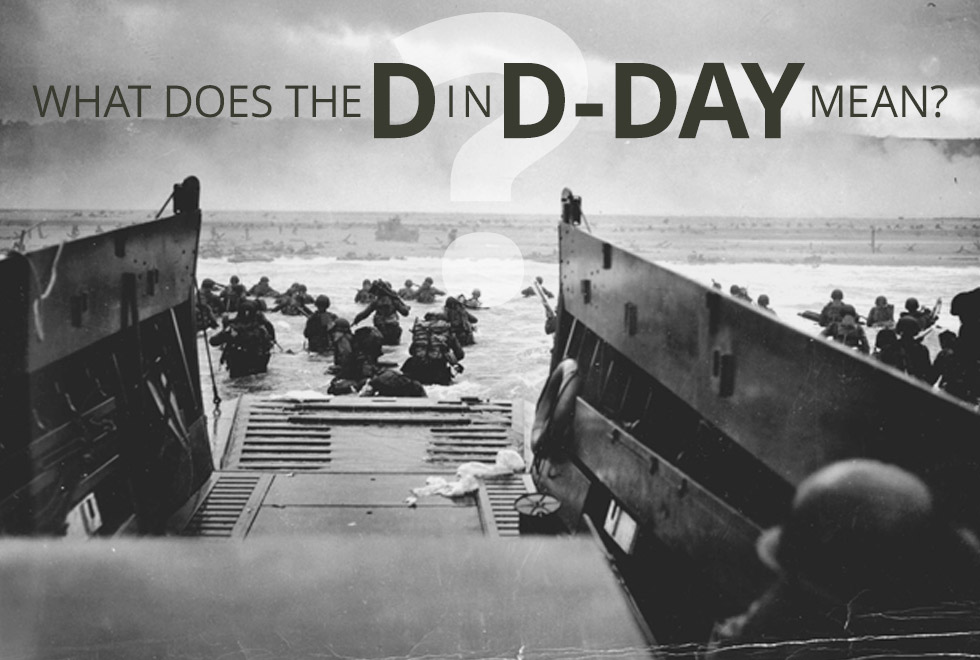 This is the most frequently asked question by visitors to The National WWII Museum. Many people think they know the answer: designated day, decision day, doomsday, o reven death day.

Our answer, like many answers in the field of history, is not so simple. Disagreements between military historians and etymologists about the meaning of D-Day abound. Here are just two explanations:

In other words, the D in D-Day merely stands for Day. This coded designation was used for the day of any important invasion or military operation. For military planners (and later historians), the days before and after a D-Day were indicated using plus and minus signs: D-4 meant four days before a D-Day, while D+7 meant seven days after a D-Day.

Many explanations have been given for the meaning of D-Day, June 6, 1944, the day the Allies invaded Normandy from England during World War II. The Army has said that it is “simply an alliteration, as in H-Hour.” Others say the first D in the word also stands for “day,” the term a code designation. The French maintain the D means “disembarkation,” still others say “debarkation,” and the more poetic insist D-Day is short for “day of decision.” When someone wrote to General Eisenhower in 1964 asking for an explanation, his executive assistant Brigadier General Robert Schultz answered: “General Eisenhower asked me to respond to your letter. Be advised that any amphibious operation has a ‘departed date’; therefore the shortened term ‘D-Day’ is used.” (p.146)

Brigadier General Schultz reminds us that the invasion of Normandy on June 6, 1944 was not the only D-Day of World War II. Every amphibious assault—including those in the Pacific, in North Africa, and in Sicily and Italy—had its own D-Day.

The National WWII Museum’s exhibitions explore the history of the D-Day invasion of Normandy and the D-Day invasions in the Pacific. Expansion plans are currently underway to triple the size of the Museum in the coming years.

156,000 Allied troops landed in Normandy on the first day of the invasion.

BY MICHELE DEBCZAK Movies didn’t invent monsters like werewolves or vampires, but they helped shape how we view them today. Many common myths—like vampires burning in the sun and zombies eating brains—were popularized more recently than you might Read more…