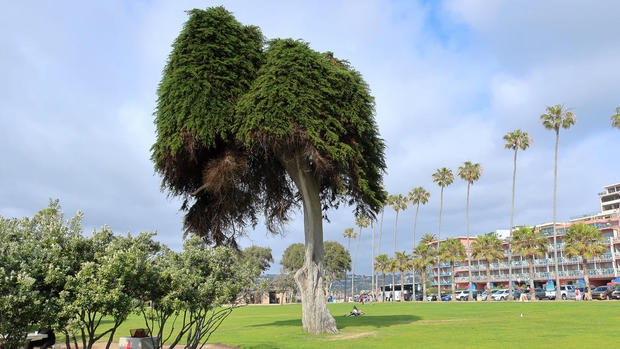 The Monterey Cypress that is native to coastal California inspired Dr. Seuss’ “The Lorax.” This particular tree — the most iconic one — has fallen over.
LAJOLLA.CO

The seaside cypress believed to have inspired the fanciful Truffula trees of Dr. Seuss’ classic 1971 children’s tale “The Lorax” has toppled in Southern California.

La Jolla was home to Dr. Seuss, author and illustrator Theodor Seuss Geisel, for more than 40 years, from 1948 until his death in 1991 at 87. In Geisel’s hands, the cypress with its long, sinewy trunk and densely clumped canopy became the cotton candy-hued Truffula. The trees’ existence, threatened by logging, finds a protector in The Lorax, whose “I am the Lorax. I speak for the trees” became an environmentalist and pop-culture battle cry.

Attendees of the Read Across America in celebration of Dr. Seuss’s birthday talk about their favorite Dr. Seuss books and why they enjoy them on Feb. 24, 2017, at University of South Carolina Beaufort’s Center for the Arts in Beaufort, S.C. By Delayna Earley

As detailed in the website LaJolla.com, an environmentally conscious Geisel rankled at development he said threatened his community. That frustration found life in the tale’s villain, the Once-ler, who in the site’s words, “builds a huge, thriving business at the expense of the Truffula trees and the creatures who depend on them.”

News of the toppled icon spread over the weekend even as San Diego officials said arborists were trying to understand what happened.

“We’re trying to figure out why the tree fell over,” Graham said Monday.

The tree was alive and appeared to be in good health, save for termites, he said. San Diego’s weather was seasonably mild last week. Graham on Monday said that much of the tree has since been removed and that the city is “looking to salvage it somehow.”