The Book Was Almost Thrown Away. Friends of the Memphis Public Library Sold it for $1,250 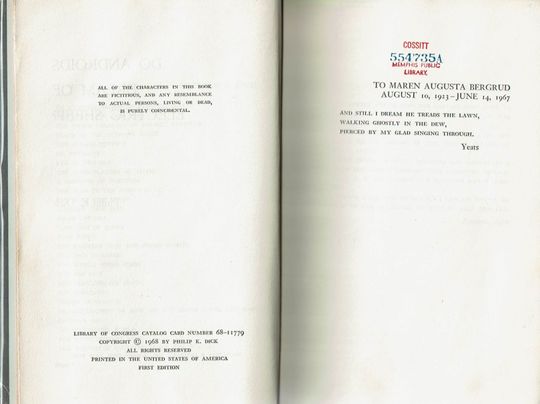 The Book Was Almost Thrown Away

Friends of the Memphis Public Library Sold it for $1,250

You never know what you’ll find in a bin of old books.

In the case of the Friends of the Memphis Public Library, you might just find a book worth $1,250.

That’s how much the organization made off a 1968 first-edition of a science fiction book called “Do Androids Dream of Electric Sheep?”

It was the most a former library book has ever sold for, Louise Brown, the group’s manager of online book sales, said.

“This thing was going to be thrown away, and I can’t imagine how many programs that it will fund for the library,” Brown said.

The money raised by the group pays for programs like training for librarians and children’s literacy events.

The Friends of the Memphis Library found and sold this 1968 first-edition copy of “Do Androids Dream of Electric Sheep?” for $1,250. (Photo: Courtesy of Louise Brown)

Memphis Public Libraries owned the book and had it on its shelves for years before it ended up in a bin to either be sold or discarded.

Brown said staff member Geoff Hopkins spotted it and recognized it might be worth a chunk of change, despite the dust jacket’s listed price of $3.95.

The Friends of the Memphis Library found and sold this 1968 first-edition copy of “Do Androids Dream of Electric Sheep?” for $1,250. (Photo: Courtesy of Louise Brown)

About three weeks after it went online, Brown said she received an inquiry, and a few days later, it sold to someone from out of town.

The book was written by Philip K. Dick and was the inspiration for the 1982 movie “Blade Runner.”

Brown said they sell books online that usually bring in between $15 to $100. The previous record for a book sale by the Friends of Memphis Library group was $700.

“It’s what we’re calling the ‘sale of the decade,'” Brown said.