The ‘Addams Family’ Began As A Newspaper Cartoon 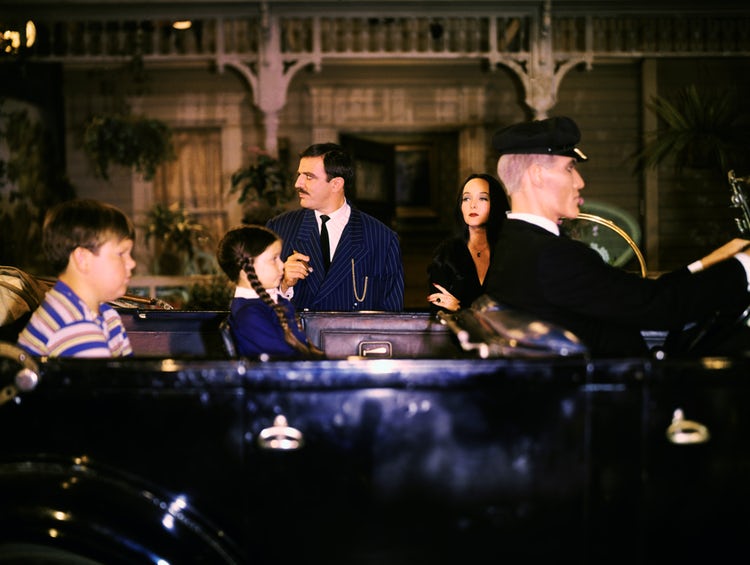 It’s that time of year when we love digging into everything that’s “altogether ooky.” (Raise your hand if you’ve already got the finger-snapping theme song from the original Addams Family television series in your head right now!) Before the various movies and animated series, John Astin and his cast mates brought the iconic family to life on our TV screens. And while it’s always great to come across the episodes airing as reruns nowadays, but it’s obviously even more fun once the Halloween season rolls around.

The classic series from the mid-1960s featured such hilariously kooky characters that you couldn’t help but laugh along with all their antics. That said, did you know the show wasn’t the first time audiences actually got a look at Gomez, Morticia, and the rest of their odd family? Or that if the series had aired in color, their dark lifestyle would have appeared a lot less bleak?

Take a look at all of the fascinating facts below to learn more about the original Addams Family series before sitting down to enjoy a few of the adorably eerie episodes this Halloween.

The family was originally a newspaper cartoon

Long before the show ever hit the airwaves, the spooky family first began appearing as cartoons by Charles Addams in the New York Times all the way back in 1938. Interestingly, none of the family members were referred to by the unique names we know them by now. Those weren’t decided until the characters made their television debut, with producers clearly paying tribute to their original creator with the family’s last name.

The debonaire patriarch of the Addams Family wouldn’t be half as legendary without Astin’s unforgettable performances in each episode. While talking to theatrical students in 2014, Astin admitted that his own identity bled into his on-screen role. He used this as an example for his advice to the young actors, telling them to “go into yourself so that what you say is genuine,” according to reports from the Baltimore Sun.

Lurch’s catchphrase was an accident

The large and brooding butler was originally supposed to be mute throughout the series. While filming the pilot, however, actor Ted Cassidy ad-libbed his famous line, “you rang?” His deep voice was so impressive that they decided to keep it as a recurring catchphrase.

On top of doing an impressive job playing the intimidating Lurch, Cassidy was also the man behind the hand crawling around the Addams family home, known simply as Thing.

Uncle Fester has a law named after him

Well, the actor who played Uncle Fester, Jackie Coogan. Coogan began his acting career as a child in silent movies, including a role alongside Charlie Chaplin in The Kid.

By the time he grew up, he was devastated to realize his parents had already spend the millions of dollars he earned. The Coogan Act, or California Child Actor’s Bill, was passed in 1939 to safeguard young actors from that issue as well as protect them from being overworked.

The house featured on the show was real

Unfortunately, you can no longer visit the Los Angeles home — it was demolished not long after the show ended later on in the 1960s. Before that, producers used an exterior shot of the impressive home found at 21 Chester Place and modified it with a few film tricks (this was long before computers came along to help us transform film like magic).

The home also has its own mysterious past, which you can read at-length in research compiled by a dedicated Addams Family fan.

The walls inside the house were pink

It might be surprising that such a dark and spooky show was actually hiding such vibrant walls, but viewers never caught on thanks to the show’s black-and-white format. In fact, most of the kitschy items seen around the house were a lot brighter than one would expect from the Addams’ interior decor.

The show only lasted two seasons

Despite its long-lasting impression on pop culture, the original TV series only ran from 1964 to 1966 — ironically the exact same set of years as another eerie series, The Munsters. Of course, we’ve had animated series, movies, and other fun recreations over the years to keep us entertained by the ghoulish family all year long — but especially during October.

John Astin is the lesser-known Riddler on Batman

Most people associate the devious villain with Frank Gorshin. But Astin also put on the green tights and purple mask in the season two episodes “Batman’s Anniversary” and “A Riddling Controversy.”

Astin’s most famous role to date is the patriarch Gomez Addams on the 1960s series The Addams Family. But it turns out he was originally supposed to play Lurch, the towering servant.

Astin and Duke’s children together, Mackenzie and Sean, both went on to become actors. Mackenzie has recently appeared on shows like Scandal and Bones, while Sean appeared in The Lord of the Rings trilogy.

Break Free from Misinformation in an Escape Room

The Euphorigen Investigation is an escape room that immerses players in a world of manipulated media, social media bots, deepfakes and other forms of deception. Featuring both an online and in-person version to help patrons navigate Read more…