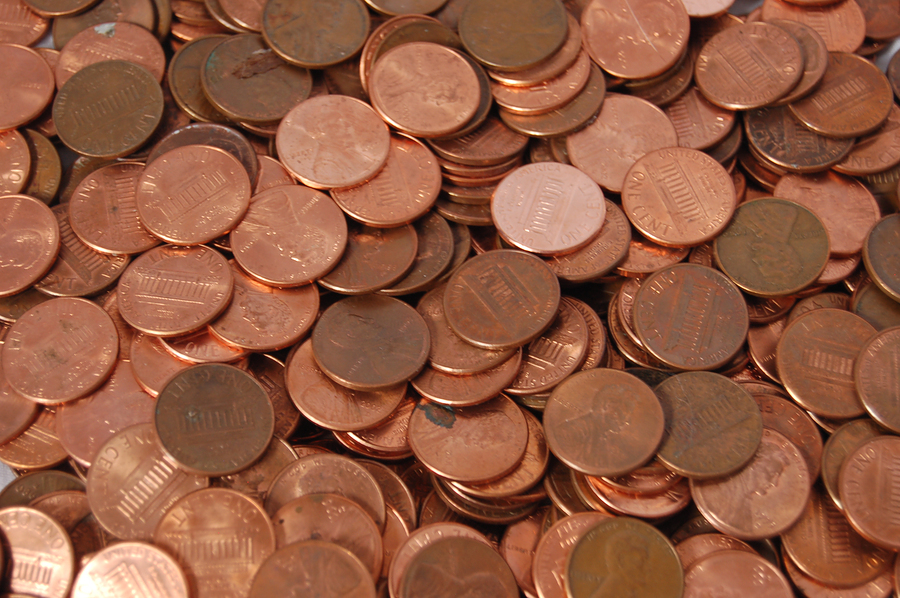 A saying goes, “Find a penny, pick it up, and all day long you’ll have good luck.” This is really just a modern take on an old superstition. In ancient times, people often thought that metals were gifts from the gods. They thought that metal would bring protection from evil, and started believing that the finding of metal would bring good luck. Besides this belief influencing the modern-day superstition of finding a lucky penny, pennies have also been seen as lucky because they increase wealth, and because wealth is a symbol of power. Some also believe that if you find a penny, more money is coming your way.

Some believe that any found penny will bring good luck, while others believe that only a penny lying face-up should be picked up. The latter thought stems from an ancient belief that there is a battle between good and evil. The heads of a penny became associated with good, while tails became associated with evil—or came to be seen as being unlucky. Those who ascribe to this belief often will flip over a tails-up penny so that the next person who finds it will find it as heads.

The name “penny” may have come from a few things. It may have derived from the word “pawn,” meaning pledge or debt; it may have come from the West Germanic word for “frying pan,” because of its shape; and it may have derived from the Latin word “pondus,” meaning “pound.” The penny is based on the Carolingian denarius, a silver coin that was the main currency in Europe for centuries. Today, various countries use a penny, which is usually the smallest denomination of currency. “Penny” is an informal name for the coin in some countries, such as the United States and Ireland, and it is the formal name for the coin in Britain. In the United States, the formal name for the coin is the one-cent coin or the American cent.

The first penny in the United States was minted in 1787 and was designed by Benjamin Franklin. It was called a Fugio and was made from 100 percent copper. In 1856, the Flying Eagle debuted; it was the first American small cent, and large cents were soon discontinued. In 1859, the Indian cent was first minted, and a Native American princess was the face of the penny for a half century.

In 1909, the Lincoln cent debuted, marking the centennial of Abraham Lincoln’s birth. This coin was the first regular issue United States coin to honor an actual person. The reverse of the coin had two ears of durum wheat on it, and the coins were commonly called “wheat-backs” or “wheaties.” During World War II, there were demands for copper on the war front, creating a shortage of the metal at home. Therefore, zinc-coated steel cents were made in 1943; a few were also made in 1944, and are very rare. Beginning in 1959, the sesquicentennial of Lincoln’s birth, and lasting until 2008, the Lincoln memorial was on the reverse of the Lincoln penny. Up until 1982, the penny was 95 percent copper, but it was changed to be 97.5 percent zinc and 2.5 percent copper because the value of copper in pennies had risen above a cent. The copper in pennies is now mainly used to plate them. Four types of Lincoln cents were released in 2009, on the bicentennial of Lincoln’s birth, depicting four moments in his life. This was the one year since 1982 when pennies were mainly made out of copper. Since 2010, a Union shield had been on the reverse of the penny.

Some have proposed discontinuing the production of the penny, but there are not yet concrete plans to do so. This is mainly because the penny costs more to make than it is worth. In 2014, it cost 1.67 cents to make a penny. To put this in perspective, in 2013 there were 55 million dollars lost making pennies.

Lucky Penny Day is observed next on Thursday, May 23rd, 2019. It has always been observed annually on May 23rd.

It looks like it won’t be a wonderful kind of day for fans, as the iconic PBS Kids show “Arthur” will come to an end Monday after 25 seasons. According to PBS PressRoom, “Easily recognized by its timeless and joyful theme Read more…

Even though it is colder outside this week, you can still bundle up to have lots of fun with your family!  Fall days are a great time to go on a spider hunt around your Read more…