Is Your Phone Spying on You? 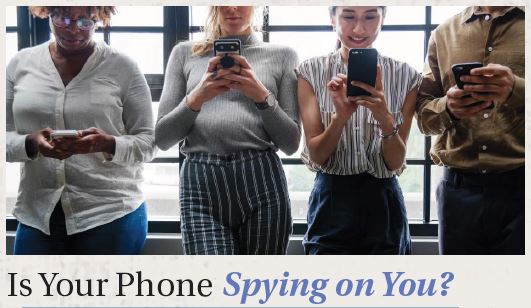 Is Your Phone Spying on You?

Have you ever searched for something and then suddenly an ad
related to that search shows up in your social media feed? What about
an ad for something you didn’t search for and only talked about buying?
It’s sometimes creepy, but believe it or not, the majority of targeted
advertisements aren’t the result of your phone spying on you.

Companies like Facebook and Google have developed robust data
mining technologies that create profiles of end users for accurate targeted
ads. They don’t need to eavesdrop on your phone’s microphone to predict
which shoes you’re interested in. They collect that information from
previous purchases, previous locations, people you’re friends with, pages
you like, the city you live in, and on and on.

If you want to avoid or, at least, reduce targeted ads, don’t allow apps
permission to access your microphone (some apps do access your mic
to collect data), avoid using traditional browsers and search engines, and
install browser plugins that block tracking data.