How A Teenage Girl Became the Mother of Horror 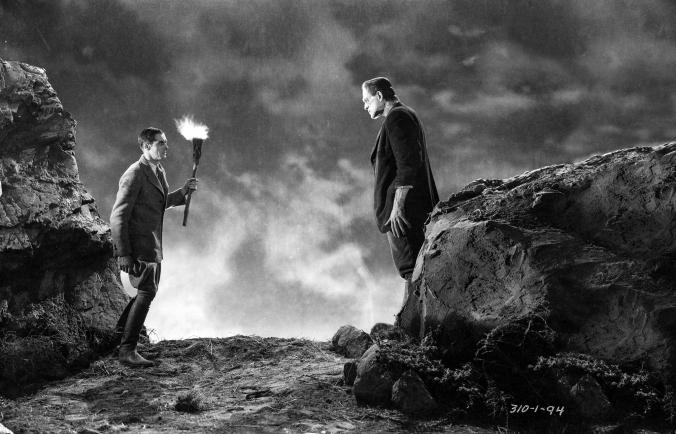 How A Teenage Girl

Became the Mother of Horror

THE MONSTER MEETS HIS MAKER The monster, played by Boris Karloff (right) has a tense encounter with his inventor in the 1931 movie Frankenstein, based on Mary Shelley’s novel. JOHN KOBAL FOUNDATION/GETTY IMAGES

Born on a dark and stormy night, Frankenstein; or, the Modern Prometheus is a true masterpiece of terror that began as a fireside ghost story and grew into a worldwide phenomenon. Its teenage author, the future Mary Shelley, drew upon her nightmares to come up with a story as challenging as it is chilling. (Read about “Frankenstein” electronic plants.)

The story took shape during the year without a summer, as 1816 came to be known. The1815 eruption of the Mount Tambora volcanoon the island of Sumbawa (part of modern-day Indonesia) had released vast amounts ash, rock, and sulfuric dust into the air, which dramatically lowered temperatures across many areas of the globe the following year. Reports of odd weather came in from all quarters in 1816: summer frosts in North America, red snow in Italy, and eight weeks of nonstop rain in Ireland.

The bizarre weather in 1816 also left an indelible mark on culture and literature. That year, a group of friends from England had been looking forward to spending the summer months together in a large house, Villa Diodati near Lake Geneva. The group included the poet Lord Byron, his personal physician John Polidori, the poet Percy Bysshe Shelley, and Shelley’s teenage lover, Mary Wollstonecraft Godwin.

Mary had met the Romantic poet Percy Bysshe Shelley in Britain in 1812. Mary was in her mid-teens, and Shelley was a married man and father of two children. The two fell in love, and in 1814, facing opposition to their relationship from Mary’s father, the couple eloped to Europe. They would marry in 1818, after the suicide of Shelley’s first wife.

THE SCIENCE BEHIND THE STORY

In the 1770s the Italian scientist Luigi Galvani conducted experiments that caused muscle convulsions in dead frogs through electrical charges. Galvanist experiments became popular across Europe thanks to Giovanni Aldini, Galvani’s nephew and disciple. In 1803 Aldini carried out a spectacular demonstration of the technique on the body of an executed criminal in London. Describing the effects of the electrical stimulus, one chronicler reported how “the left eye actually opened.” Galvanism directly influenced Mary Shelley’s fictional creation, and the verb “galvanize”—to stimulate to action—soon passed into the English language.

From Nightmare to Novel

The outdoor activities they had been eagerly anticipating were washed out by the constant torrential cloudbursts in Switzerland that year. “It proved a wet, ungenial summer,” Mary wrote years later, “and incessant rain often confined us for days to the house.”

The group were all advocates of Romanticism, a movement that originated in the late 18th century in response to the dispassionate reason of the Enlightenment. Romantics favored nature, passion, and the experience of the individual.

To pass the time indoors, the party held stirring discussions of current scientific theories. They were particularly fascinated by the experiments with electricity carried out the century before by Luigi Galvani, who had observed how an electric current made the legs of dead frogs twitch. They speculated on the possibility of bringing dead matter back to life by using electrical impulses. Mary later recalled: “Perhaps a corpse would be re-animated; galvanism had given token of such things: perhaps the component parts of a creature might be manufactured, brought together, and endued with vital warmth.”

After all this scientific talk, Lord Byron took the group in a different direction and suggested that each member of the party write a horror story. Out of this parlor game came a new kind of tale, Mary Shelley’s terrifying novel, Frankenstein.

Mary, then age 18, had little writing experience. A sensitive, highly cultured woman whose mother had died when she was a baby, her frequent bouts of depression fueled a morbid fascination with death. In later years she would recall how, during that Swiss summer holiday, she experienced a nightmarish vision with “a vividness far beyond the usual bounds of reverie.” She described it: “I saw the pale student of unhallowed arts kneeling beside the thing he had put together. I saw the hideous phantasm of a man stretched out, and then, on the working of some powerful engine, show signs of life and stir with an uneasy half-vital motion.”

In response to Byron’s ghost-story game, Mary turned her nightmare into a yarn about a scientist who creates a monstrous creature. Later, back in Britain, she expanded this initial tale into a novel. “At first I thought but of a few pages, of a short tale,” she wrote later, “but Shelley [by then her husband] urged me to develop the idea at greater length.” Published anonymously at first in 1818, she titled the work Frankenstein; or, the Modern Prometheus. Her name appeared on the second edition in 1823. In 1831 she republished the work, changing some of its more radical passages, adding a preface containing a tribute to Shelley’s late husband, who drowned in 1822. It is the version that is best known today.

Mary Shelley’s novel tells the story of a Swiss scientist, Dr. Victor Frankenstein. He attends the lectures at the University of Ingolstadt, in Bavaria, where he is fascinated to learn about the latest advances in science and resolves to “pioneer a new way, explore unknown powers, and unfold to the world the deepest mysteries of creation.” He sets to work, feverishly studying anatomy and the processes whereby human tissue is generated and corrupted. Then one day in a sudden flash of inspiration, he believes he has discovered “the cause of generation and life” and become “capable of bestowing animation upon lifeless matter.”

Frankenstein carries out mysterious experiments and constructs a titanic, hulking body. “I collected the instruments of life around me, that I might infuse a spark of being into the lifeless thing that lay at my feet.” The creature comes to life, and Frankenstein is horrified by what he has unleashed. A tragic chain of events is set into motion, and by the end of the tale, everything Frankenstein loves has been destroyed by his creation.

Frankenstein reflects the deeply felt concerns of an age conflicted over religion and science. The novel explores the boundary between life and death, and the potential dangers human arrogance might arouse when trying to “play God.”

The fact that these big questions still inform the social implications of science in the 21st century is a key reason that the popularity of Mary Shelley’s story has only grown over time. Since its first publication, the book has never been out of print. Stage productions of the story followed as early as 1822. In the 20th century dozens of films told and retold the Frankenstein story. The most iconic version was produced by Universal Pictures in 1931 and starred Boris Karloff in what became his signature role.

Despite her literary successes, personal tragedy overshadowed much of Mary Shelley’s life. She lost her husband in 1822. She suffered several miscarriages, and only one of her children survived to adulthood.

In her later years, widowed and careworn, Mary Shelley became notably less radical in her philosophy than when she had written Frankenstein as a teen. Revising the work for the 1831 edition, she made significant changes to the underlying ideas of the plot. In the first version Dr. Frankenstein makes the creature in the spirit of free, scientific curiosity; his sin is that he then refuses to love and nurture him once he comes to life. The later edition portrays Dr. Frankenstein as a victim of fate; much of the science behind the creation of the creature comes about through chance.

In some ways the very work itself seems to have become Mary Shelley’s own “creature”: the product of youthful ideas that in later life were replaced with more conventional notions of the forces of fate. As she wrote in a letter in 1827: “The power of Destiny I feel . . .pressing more and more on me, and I yield myself a slave to it.”