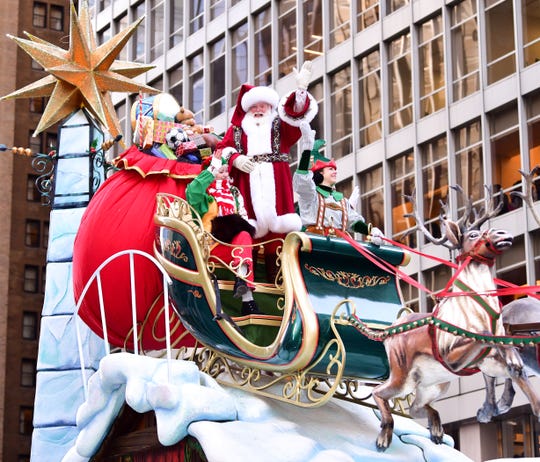 It’s time for Christmas to have its annual TV takeover.

That starts with one parade (New York City on Thanksgiving morning) and continues through another (Disney parks on Christmas morning), four weeks later. In between are cartoons, competitions, music and movies.

Lots of movies, actually. In a typical week, there are at least nine new ones – three on the Hallmark networks, three on Lifetime, two on Ion, one on UPtv – plus approximately one zillion reruns.

Indeed, Hallmark and Lifetime have already been filling their days with Christmas. And that’s before Dec. 1, when Freeform starts its annual “25 Days of Christmas.”

Each year, there are a few changes. Now we find more competition shows; people compete in holiday decorating, singing, wrapping, baking and beyond. We find two of the standbys – Frosty and Rudolph – being shared by two networks, CBS and Freeform. And we find Fox with a counterpunch: “The Moodys” (originally “Moody Christmas”) is a six-episode comedy with a semi-dysfunctional family.

Mostly, though, things will be the same – Grinch and Charlie Brown and Santa and such. Expect some happy endings.

Dec. 4: “The Moodys,” 9 and 9:30 p.m., Fox, continuing Dec. 9 and 10. Originally called “Moody Christmas,” this is a six-episode series, with Denis Leary and Elizabeth Perkins as parents of three grown children. One (Jay Baruchal) lives at home; the others arrive for the holidays.

Bare knees and ankles are visible though snow covers the grown in “Frosty the Snowman”. (Photo: CBS)

Rudolph, right, meets a new friend, Hermey the Dentist, in a scene from the animated classic “Rudolph the Red-Nosed Reindeer.” (Photo: CBS)

Dec. 21: “Battle of the Christmas Movie Stars,” Lifetime. In holiday-themed games, actresses compete to be named Queen of Lifetime Christmas.

Dec. 16: “Christmas With the Tabernacle Choir,” 9-10 p.m., PBS, with Kristen Chenoweth. A 90-minute version will be 7 p.m. Dec. 19 on BYUtv, which has frequent reruns of last year’s special (Sutton Foster) and other concerts.

Dec. 22: “A Home For the Holidays,” 9 p.m., CBS. Menzel hosts and performs in this adoption-oriented hour. Also performing are Adam Lambert, Kelly Rowland and Ne-Yo.

(Here are Your Music Reruns)

Actor James Stewart, with Donna Reed and other cast members in a photo from the 1946 classic movie “It’s a Wonderful Life,” remains an influence in the town he hasn’t lived in for decades. (Photo: NBC Photo)

(First, some classics; not all have Christmas connections, but people expect them during the holidays)

Dec. 24: “A Christmas Story Live,” 8 p.m., NBC. Well, it won’t be live this time, but it was originally. This is NBC’s fun production of the Broadway musical, with Matthew Broderick as the adult Ralphie.

(Now some new ones)

Nov. 28: “Merry Happy Whatever,” Netflix. Dennis Quaid plays a dad who is less merry when his daughter (Bridgit Mendler) arrives with her boyfriend. Netflix also has “Holiday Rush” on Nov. 28, “A Christmas Prince: The Royal Baby” on Dec. 5 and “A Family Reunion Christmas” on Dec. 9. Also on streaming, Disney+ recently debuted “Noelle,” with Anna Kendrick and Bill Hader.

Dec. 7: “A Christmas Love Story,” 8 p.m., Hallmark. Yes, there are lots of Hallmark films, but this is under the “Hall of Fame” banner, with a bigger budget. Kristen Chenoweth and Scott Wolf star.

Dec. 16: “Good Trouble,” 9 and 10 p.m., Freeform. It’s not quite a movie, but close. The family from “The Fosters” visits the daughters in Los Angeles, where there are secrets and a big Christmas project.

Many more movies on …

… Hallmark and Hallmark Movies & Mysteries. Both have Christmas films every night, with a new one on one of the channels – 8 p.m. on Hallmark, 9 p.m. on its sister channel – on Fridays through Sundays, plus some Thursdays. On a musical weekend, Hallmark has “Christmas at Dollywood” (with Danica McKellar and Dolly Parton) at 8 p.m. Dec. 8; before that, Hallmark Movies & Mysteries has “A Homecoming For the Holidays,” with Broadway’s Laura Osnes, at 9 p.m. Dec. 7.

… Lifetime. On Thanksgiving (Nov. 28), it starts a string of four nights of new movies at 8 p.m. Then it has new ones at 8 p.m. Fridays through Sundays), through Dec. 22. Highlights include “You Light Up My Christmas Lights” on Dec. 1, with Kim Fields starring, producing and bringing back her “Facts of Life” co-stars for cameos… And “A Christmas Song” on Dec. 14, with Ashanti.

… And UPtv. It debuts Christmas movies at 7 p.m. Sundays, rerunning them at 11. A Christmas-movie rerun is wedged in at 9 … with lots more reruns throughout the week.

(And occasionally, a Christmas movie is surprisingly good; here are a few worthy reruns.)

ON A SERIOUS NOTE

HOME AND TREES AND SUCH

Dec. 16: “A Very Brady Renovation,” 10 p.m., HGTV; also 1 p.m. Dec. 22, Food Network. Now that they’ve fixed up their old TV home, the six people who played Brady siblings will catch a holiday there. They’ll work with Jasmine Roth of “Hidden Potential” on decorations and Ree Drummond of the Food Network’s “Pioneer Woman” on the food.

Dec. 17: “The Ornament of the World,” 8-10 p.m., PBS. This views the eight, artful centuries when Muslims, Christians and Jews co-existed in Medieval Spain.