Northeast Regional Library Assistant Director Dee Hare is being promoted to director upon the retirement of William McMullin at the end of April. / Photo by Jebb Johnston

THE NORTHEAST REGIONAL LIBRARY HAS A NEW DIRECTOR

“When I was little, I used to make little notepaper cards and paper clip them to my books in case any of my friends ever wanted to check one out,” she said. The assistant director for the Northeast Regional Library is now preparing to take on the role of director upon the retirement of William McMullin, who will leave at the end of April. “I really hope to continue the great service that William has done as director,” she said. “All of our libraries have a good solid foundation because of his leadership, and I hope to continue that.” McMullin is optimistic about leaving the Corinth headquarters and 12 other branches in her hands. “Dee Hare has a complete understanding of the way the Northeast Regional Library works,” he said. “She’s intelligent and inquisitive. As she begins her term as director, I know that she will do her utmost to provide quality library service to the four counties in our region.” The Booneville native and Booneville High School graduate began her library career with a part-time job at the city’s George E. Allen Library, where she moved up to assistant librarian and then served as head librarian for about 12 years. The next step up was assistant director for the regional system, a post she has held for the past three years. “I loved my time in Booneville. I’m very proud of that library there,” she said. Her main duty as the regional system’s assistant director is supervising the branches. “I love getting out and driving to the branches and helping them with their issues and advising them,” said Hare. “That will still continue when I am director.” She also had responsibility for the library’s technology, which is now being put in the hands of a new technology coordinator. “With all of our branches now, we have 150 to 200 computers, staff and public, that have to be maintained,” said Hare. “We hope to be able to deal with technology changes a lot quicker now.” As assistant director, she is proud to have developed some literacy initiatives, including a workshop for the librarians to help them plan the annual summer reading program for their branches. At the request of local schools, she developed an early literacy parent-training workshop which is to be presented in Corinth and Alcorn County schools. Hare has observed the changing role of libraries in the internet age. “Libraries aren’t just about books — we’re about information access in all of its forms,” she said. “We have our free public computers for people to use. We try to help and assist with free workshops as much as possible for resumé writing and job hunting. We field a lot of everyday questions about that.” Outside of work, Hare enjoys reading all genres and adding to her extensive Winnie the Pooh collection. With husband Mike, she has a four-year-old son, Cole. With an English degree in hand from Delta State University, she recently added a master’s degree in library science from the University of Southern Mississippi to her credentials. Between the studies and the family’s recent move from Tupelo to Corinth, she has seen some hectic times in the last few years. “I really like living in Corinth,” she said. “Now that I’m finally finished with my master’s degree, which I was doing online while working full-time and started when Cole was four months old, I’ll have a lot more free time to get involved in the community.” Read more: Daily Corinthian – New library director follows dream We celebrated William McMullin’s 40+ years of wonderful service to the Northeast Regional Library, Corinth Public Library, and the city of Corinth. 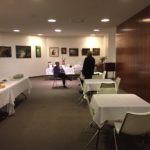 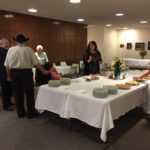 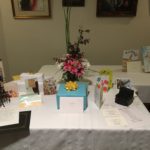 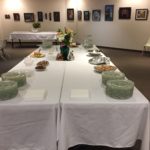 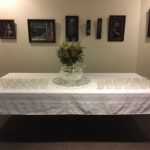 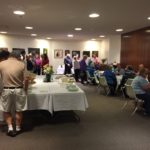 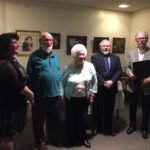 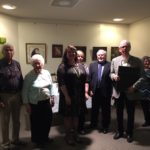 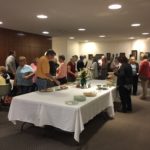 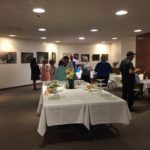 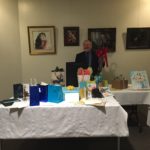 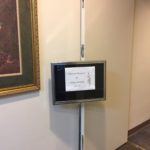 Why I Loved National Library Week 2016

Joy! Wonder! Encouragement! Excitement! It’s all at the library during NLW! During the last 40 years I’ve attended at least 500 programs for National Library Week. Each year the librarians at the 13 branches in our Northeast Regional Library System try to present a showcase of events that highlight the best that the libraries have to offer so our patrons can enjoy this special week. At the Rienzi Library, the mayor of Rienzi visits with the 6th graders of Rienzi school each year and inspires them to follow their dreams. His heartfelt encouragement often includes tales of courage and challenge. This year he talked about the dramatic change these students will experience when they go to a new school, but throughout the talk he reminded them to be courageous and bold in whatever path they follow. At the Corinth Library, on two separate days, two gifted artists described how they came to be painters. They both talked of early influences and the fact that throughout their lives they enjoyed drawing and sketching and were honored to be included in the art show that is on display. Mrs. Kathy Bryant Williams referred to her mother Iris Bryant as an important influence in her development as an artist.  Mrs. Sylvia Marlar Caples had finished her presentation when a young man spoke up from the audience to say how much he had appreciated her work back in 1995. He then brought the painting that she had created for him that year into the auditorium for her to see! She was overjoyed to have such acclaim and he was giddy with excitement because she had influenced him to paint also. At the Burnsville Library the subject of Native American artifacts was discussed by Mr. Matthew Newcomb. His arrowhead and rock collection included items that were worked over 6000 years ago by the inhabitants of our area. As he discussed the history and tradition of the Choctaw and Cherokee tribesmen, he encouraged a young listener to study the area, to seek for artifacts, to pay attention to his surroundings, and to be a good student of history.  The young boy was excited by the program and encouraged to participate in this collecting adventure. At the Walnut Library librarian Eric Melton entertained the school children with some of the funny books owned by the library that are available to them to check-out. For free! They could tell that anyone could have fun while reading a good book. At the Belmont Library a volunteer named Gail Barnes also presented a special story hour. She used puppets and cutouts to explore how animals are transformed from eggs to full grown animals. The theme for Library Week this year was Libraries Transform and each of the librarians were trying to make a point that each of us can be transformed when we explore, study, learn, and grow.  We are truly transformed when we use the library. At many libraries over the years there have been Open Houses, Luncheons, Teas, and every other kind of event you can think of to show off the hospitality of the library staff. Last Monday alone I had 4 kinds of cake at 4 different libraries, plus a few glasses of punch to wash it down. What a delight to meet the librarians in their hostess mode. They are kind, generous, and many of them like to cook. Good for them, bad for the waistline. Our libraries could not put on these events without the help of many partners. Banks have come forth this year to present budgeting and saving presentations at Booneville and Iuka. Dulcimer Guilds performed at Ripley and Iuka. Tishomingo County Emergency Management helped people sign up for CODE RED. The Baldwyn Library presented several speakers whose lives had been transformed in various ways – dieting, getting off of drugs, learning a skill. These wonderful testimonies were then followed by professionals who could answer questions from the audience. It was an emotional evening. In former years we’ve had the help of county agents and county home demonstration clubs, firemen have showed us how they put on their fire gear, game wardens have taught us how to use a life preserver, early responders have taught us CPR, nature specialists from Crow’s Neck helped us identify snakes and turtles and other creatures. Each year I am delighted at the variety of community helpers who have lovingly and willingly participated in sharing their abilities and interests with our patrons. It is a delight to experience something new at the library. I hope you will take a moment to visit your friendly librarian, check out a book or an e-book, select and watch a DVD, or listen to an electronic audiobook or one on CD. If you need help the librarian will be glad to help you. Visit the library and take every opportunity to transform your life.