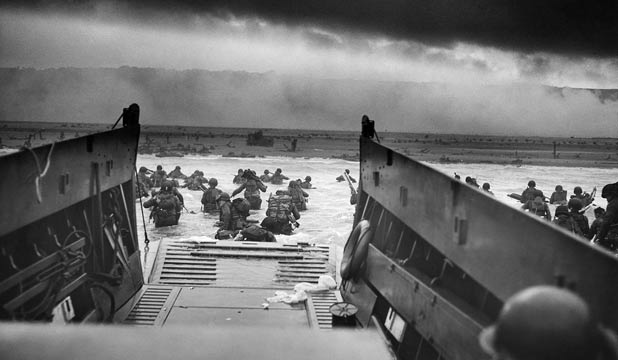 Until the very last minute, the place of invasion – Normandy- was the most heavily guarded secret on the planet.

Even the units conducting the initial assaults did not know the locations of their landings.
Surprise was crucial since Germany had 55 divisions in France – the Allies could transport no more than 8 divisions on D-Day morning.

It is estimated that nearly 2 million soldiers, sailors and airmen were involved in Operation Overlord, including S., British, and Canadians who were scheduled to fight after men on the ground secured a Normandy.

6th June 1944: Reinforcements disembarking from a landing barge at Normandy during the Allied Invasion of France on D-Day. (Photo by Hulton Archive/Getty Images)

The United States shipped 7 million tons of supplies (that translates into 14 billion pounds of material).

Of those supplies, ammunition accounted for 448,000 tons.

Air-support operations – often overlooked in the success of D-Day – sustained significant losses: Between the 1st of April and the 5th of June, 1944, the Allies flew 14,000 missions losing 12,000 airmen and 2,000 aircraft.

By the end of the Normandy campaign, 28,000 airmen were dead.

Losses to frontline troops were proportionally worse during the 77-day Normandy campaign than they were during the major battles along the Western Front during World War I.
There are 9,386 graves in the American cemetery at Colleville-sur-Mer. Each grave faces west, toward America.

307 of those graves contain the remains of “unknown” soldiers.

1,557 names are listed in The Garden of the Missing for those who were never found.

4,868 British dead are buried in the Bayeux Cemetery.

1,837 British names are listed at Bayeux for those who were never found.

There were 946 Canadian casualties in the Normandy.

By the end of the Normandy campaign the Germans were hemorrhaging men and machines, with two armies all but destroyed.

The Deadly Irish Epidemic That Helped Bring Dracula to Life from Atlas Obscura. Forget Vlad the Impaler. A 19th-century cholera outbreak in Sligo may have been Bram Stoker’s chief inspiration. AN AFTERNOON WIND FUNNELS DOWN deserted Read more…