Published by Library Staff on February 22, 2022 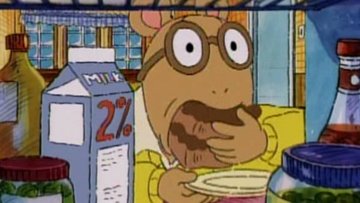 It looks like it won’t be a wonderful kind of day for fans, as the iconic PBS Kids show “Arthur” will come to an end Monday after 25 seasons.

According to PBS PressRoom, “Easily recognized by its timeless and joyful theme song, the iconic, award winning PBS Kids series has touched audiences around the world with its heartfelt and humorous stories about family, friends, and the challenges of growing up.”

Based on Author and Illustrator Marc Brown’s books, the show centers around Arthur, an aadvark in the fictional city of Elwood, and his relationships with his family and friends of different species.

Show Screenwriter Kathy Waugh initially revealed that PBS Kids planned to end the longterm series during an interview on the “Finding DW” podcast over the summer.

The show will end with a finale that reveals the fan-favorite characters all grown up and the future that awaits them. The 25th anniversary of the show will be marked by a marathon of all 250+ episodes and movie specials that have aired over the years, which will lead up to four new episodes on Feb. 21 that will conclude the entire series, according to PBS Chicago.

“To me, it just felt evergreen, like it was never going to end but it did end,” Waugh revealed in the podcast.

Waugh also went on to mention that even though the series will end, the “Arthur” characters won’t be gone completely.

“PBS and I decided to do some PSA’s on various issues like voting, hand washing, pandemic related issues, and I used the Arthur characters, so they’re still around.”

“Arthur” will also be creating new content for other platforms. PBS Kids announced in a statement, “GBH Kids will partner with Gen-Z Media for a new podcast, which will leverage Arthur’s incomparable library of stories, favorite characters, and heartfelt moments that have strongly resonated with audiences to create engaging audio content that reaches existing fans, as well as help introduce a new generation to the series and some of its classic storylines.” The podcast will be available on PBS Kids.

Over the years, Arthur has gained some attention on the internet when memes from the show gained popularity from an online audience.

From DW holding onto a fence, peering at something longingly, to the Arthur fist meme, Prime Video shared an abundance of memes from the show that the internet knows and loves, expressing “thanks for the meme-ories.”

Arthur is ending after 25 seasons, and all we have to say is thanks for the meme-ories. pic.twitter.com/weNTVSeQFf

Even though it is colder outside this week, you can still bundle up to have lots of fun with your family!  Fall days are a great time to go on a spider hunt around your Read more…

☀ We have been in the middle of a heat wave, with temperatures outside soaring into the 90s.  Take advantage of the sun shining down to create some Sun Prints today.  Sun prints are what Read more…