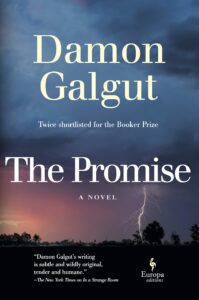 Honoring the finest works of fiction from around the world, the Booker Prize has announced that its 2021 winner is The Promise by Damon Galgut. The ceremony was hosted by journalist Samira Ahmed and included remarks from the judges and shortlisted authors, as well as readings from the six novels and short interviews with past winners Douglas Stuart, who won last year for Shuggie Bain, and Ben Okri, who won the prize in 1991 for his novel The Famished Road.

South African novelist and playwright Galgut has been shortlisted for the Booker Prize twice before, in 2003 and 2010, for his novels The Good Doctor and In A Strange Room, and he greeted the announcement with immense surprise. While accepting the award, Galgut stated that, “This has been a great year for African writing and I would like to accept this on behalf of all the stories told and untold, the writers heard and unheard from the remarkable continent that I’m part of. Please keep listening to us, there’s a lot more to come.”

The Promise is Galgut’s ninth novel and first in seven years. It follows a white South African family during their country’s transition out of apartheid through the lens of four funerals over the course of four decades. The judges described it as “a strong, unambiguous commentary on the history of South Africa and of humanity itself that can best be summed up in the question: does true justice exist in this world?”

Take a look at the moment Damon Galgut found out that he had won the #2021BookerPrize! Read more about ‘The Promise’ here: https://t.co/HOh2uZApV4#BookerPrize #ThePromise #DamonGalgut @chattobooks @VINTAGEBooks @penguinrandom pic.twitter.com/BYd17ktG5O

Chair of the judges, Maya Jasanoff, went on to say that, “We felt among the judges that this book really is a tour de force. It combines an extraordinary story with rich themes—the history of the last 40 years in South Africa—in an incredibly well-wrought package . . . For me, The Promise manages to pull together the qualities of great storytelling—it’s a book that has a lot to chew on—with remarkable attention to structure and literary style. With each reading of this book, it revealed something new.”

The winner was selected by a panel of judges, including historian Maya Jasanoff, writer and editor Horatia Harrod, actor Natascha McElhone, twice Booker-shortlisted novelist and professor Chigozie Obioma, and writer and former Archbishop Rowan Williams. First awarded in 1969, the Booker Prize is open to writers of any nationality writing in English and published in the UK or Ireland. The winner of the prize will receive £50,000 and each shortlisted author will receive £2,500. This year the judges considered 158 novels.