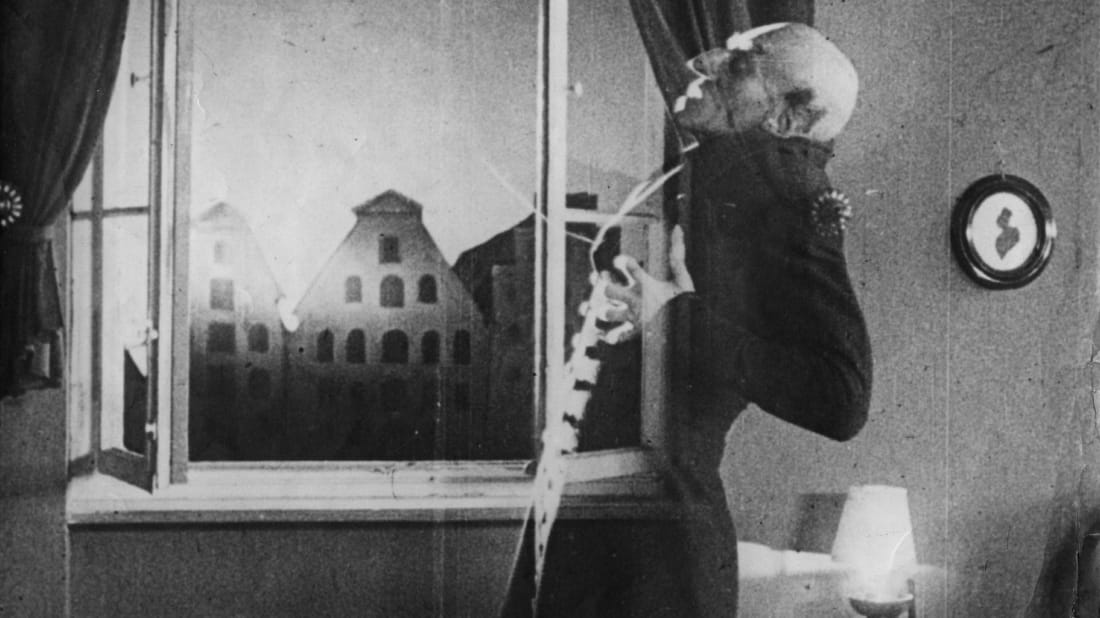 Movies didn’t invent monsters like werewolves or vampires, but they helped shape how we view them today. Many common myths—like vampires burning in the sun and zombies eating brains—were popularized more recently than you might have thought. Read on to learn about 11 classic monster tropes and the movies that introduced them to pop culture.

1. VAMPIRES GET BURNED BY SUNLIGHT.

Vampires getting burned in the sun is a classic myth, right up there with vampires hating garlic and having no reflection in a mirror. But unlike other pillars of vampire mythology, this trope didn’t originate with Bram Stoker’s Dracula or earlier folklore. The unauthorized German Dracula adaptation Nosferatu was the first piece of media to depict a vampire perishing when exposed to daylight. In Stoker’s novel, sunlight weakens vampires, but that doesn’t stop the title villain from walking around during the day. Nosferatu’s fiery demise was added by the filmmakers to make the climax more visually interesting.

Poster for The Bride of Frankenstein (1935). WIKIMEDIA COMMONS

In her novel Frankenstein, Mary Shelley describes Frankenstein’s monster as having “yellow skin” that “scarcely covered the work of muscles and arteries beneath.” Green face paint was chosen for the film adaptation because of the technical limitations of the time. Blues and greens appeared as a ghoulish white shade on black-and-white film, which helped Boris Karloff stand out from the rest of the cast. Eventually the character was depicted as being green on promotional posters, and a new hue for the monster was born.

3. GETTING BITTEN BY A WEREWOLF TURNS YOU INTO ONE.

Many parts of this werewolf myth predate Hollywood. According to legend, some men would shapeshift into wolves during the full moon—but how they gained this power in the first place varied. The Greeks believed lycanthropy was a curse from the gods, while Norsemen thought a person became a werewolf by donning a wolfskin belt. The 1935 film Werewolf of London likely originated the idea that the affliction was transferred by bite—possibly borrowing the concept from vampire folklore.

Prior to 1939, witches were depicted with bright red or orange faces, if not more human-looking skin tones. Then The Wizard of Oz premiered and reshaped our perception of the mythical figures. The Wicked Witch of the West didn’t have green skin in Frank L. Baum’s book, but the filmmakers wanted to make the most of Technicolor once Dorothy arrived in Oz. They covered Margaret Hamilton in an unnatural (and as they later learned, toxic) green face paint that made her character stand out. The bright shade of emerald has been linked with witches ever since.

George A. Romero’s Night of the Living Dead (1968) helped popularize the modern zombie myth. That includes the trope of the undead moving only slightly faster than actual corpses. The monsters are so known for their lumbering walk that any movie that depicts fast-moving zombies is instantly notable.

6. FRANKENSTEIN’S MONSTER HAS BOLTS IN HIS NECK.

Any mention of bolts on the sides of the monster’s neck is missing from Mary Shelley’s Frankenstein. The makers of the 1931 film Frankenstein may have added the metal nubs to emphasize the monster’s connection to electricity. They were originally meant to be electrodes, but critics described them as bolts and the misconception stuck around.

Bram Stoker describes Dracula as “clad in black from head to foot, without a single speck of color about him anywhere.” The character first began dressing in a snazzy cape and tuxedo in a 1924 stage production of the story, which Bela Lugosi starred in when it moved from London to the U.S. in the late 1920s. When Lugosi brought Dracula to the screen in 1931, he took this suave look with him. The one element of Dracula’s outfit Lugosi gets full credit for is his mysterious medallion. Despite only appearing in two scenes, the accessory is now part of every generic vampire costume sold in Halloween stores.

Most werewolf folklore describes men who turn into wolves—not half-man, half-wolf hybrids that walk on their hind legs. This quickly changed when Hollywood started making werewolf movies. In addition to introducing the werewolf bite myth, Werewolf of London (1935) was the first film to show an anthropomorphic, bipedal werewolf as its villain. Today, the monster’s man-like features are taken for granted.

One zombie trope Romero can’t take credit for is their appetite for brains. This cliché comes from the 1985 horror comedy Return of the Living Dead, which isn’t a part of the official Night of the Living Dead canon. According to the movie’s writer and director Dan O’Bannon, human brains are a natural pain-reliever for zombies.

10. REVIVED MUMMIES STAY IN THEIR WRAPPINGS.

The bandages mummies are wrapped in would make it hard for them to move around, which is why Boris Karloff as Imhotep ditches his shortly after waking up in 1932’s The Mummy. The Mummy’s Hand (1940) shows the first example of a mummy moving around and stalking his prey in his wrappings, which is how they’re usually depicted today.

In 1931’s Frankenstein, the monster’s speech is limited to grunts, and in The Bride of Frankenstein (1935) he only speaks in broken sentences. This is a departure from Shelley’s book, in which the creature can speak eloquently. He teaches himself to read and write after he’s created, and by the end of the novel he’s polylingual.

I have Thanksgiving 🦃 with my sister Tish Hinkle every year, and part of the annual tradition is “Punkin’ Chunkin’.”  Tish enthusiastically decorates her home with real 🎃 pumpkins for fall, discarding them immediately after Read more…